My friend Justin came over tonight and he made a delicious dinner.  It was very juicy, and there was a nice contrast of flavor between all the fruit and the ginger on the chicken.  It also wasn't a super-time consuming recipe, or too labor-intensive.  Anyway, when he came over with the plan to cook, I told him I was going to take pictures and basically force him to guest post on my blog.  So, that's what is happening now.  Thanks Justin!  Here he is!
Hi folks, Justin here! So, we're aiming for apricot chicken, but don't let the name fool you -- there are actually more than 2 ingredients. Many more, in fact:

Our story begins with what appears to be an amateur medical experiment gone horribly wrong: 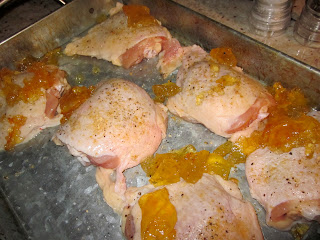 But don't panic -- we've merely rinsed the chicken and dumped them in a shallow baking dish, then sprinkled them with salt, pepper and ginger. The marmalade's gelatinousness foiled my attempts to spread it evenly over the chicken. This turned out to be moot, because of what you'll do next: 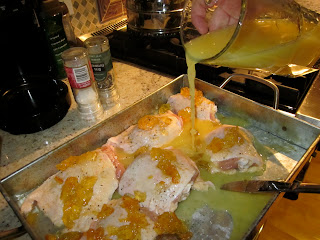 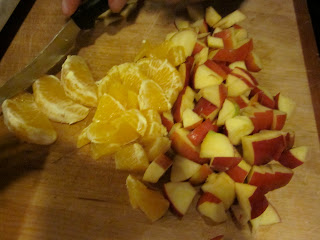 After 20.000 minutes pass, chop the fruit to 2 cm^3 cubes and apply to the chicken. Following that, augment the chicken with 34 dried apricots and 88 raisins. 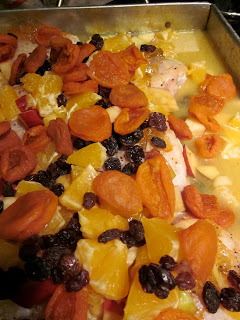 This arrangement was again re-inserted into the oven and allowed to sit at 350 degrees until the uppermost apricots burned. In desperation the fruit was pushed into the liquid, exposing the chicken. This washed away the second coating of salt, pepper, and ginger. A coating of brown sugar was applied to replace it. 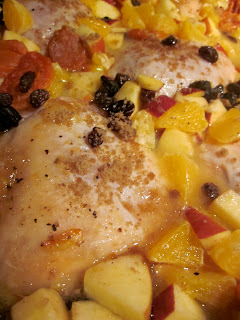 An eternity was allowed to pass while the chicken browned. Forty-three minutes after that, incisions in the chicken indicated it was non-lethal, and the pan was extracted. Congratulations were awarded for not burning the chicken. 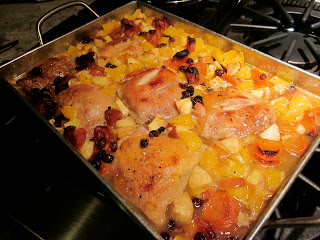 Brown rice accompanied the chicken, rounding out the meal and absorbing the delicious juices like a starchy, nutritious mop. 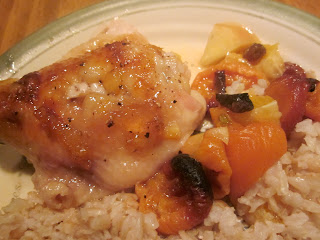 No one was harmed in the making of this meal. But it is really too early to say for sure.  Makes 6-7 servings.
Posted by Sara Bildner at 9:52 PM

love to hear what you have to say: